Due to our long transit, the JR superintendent organized a ship tour to areas where regular science folks would not have had the chance to pry into. Technically, these areas are not exactly forbidden, but an escort is needed when you want to visit.

We started the tour on the bridge, where I found out that the steering wheel on the JR is the same size as a Go-Kart steering wheel. And the ship also has autopilot mode!

Peering out the window, I realised that the captain and his mates could see the ridiculous things we have been up to on the lower deck. Oh boy…

The Earth is round after all!

We then headed to the JR’s DP (dynamic positioning) area behind the bridge. There was a whole bunch of mumbo jumbo in there, which I did not remember. All I remembered were the involvement of computers in making sure the ship is positioned correctly above the intended drill hole by controlling the thrusters. 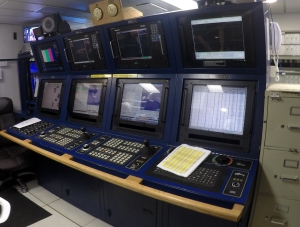 After the bridge, we headed towards the derrick with our hard hats, goggles and closed-toe shoes.

Electric motor on the derrick

After the bridge, we headed towards the derrick with our hard hats, goggles and closed-toe shoes.

Then, we were introduced to the different drill bits that will be used during the recovery of the cores as well as the core catchers. There is the APC (Advanced Piston Corer), XCB (Extended Core Barrel) and the RCB (Rotary Core Barrel), as shown in the picture below. It will be too long for me to explain how each of them work, so may Google be your best friend.

More core barrels are arranged over the floor deck waiting to be utilized once we approach the drill site.

We next headed towards the engine room where I realised that everything was computerized – and not only on the bridge. Just like an airplane, the ship is fully automated. 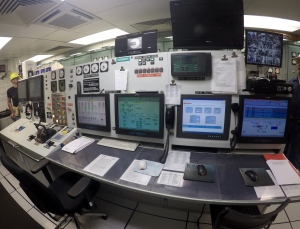 There are 5 main engines on the JR. Being inside the engine room was akin to being inside a sauna. It was hot, stuffy and loud – mind you I had earplugs and I could still hear the roaring of the engines.

One of the main engines

Side profile of a main engine

Of course, somewhere inside the main engine room are the motors that run the two main propellers on the JR. These are the same propellers that are propelling us towards the Maldives. There are also 12 thrusters that will be used upon arrival at the Maldives to keep the ship in place when the drilling starts.

The main life support systems on the JR are the 3 water distillation systems. Seawater is pumped into these systems, distilled and deionized for shipboard consumption. The water tanks are capable of storing up to 3 days worth of freshwater so, the ship has to make her own. The ship uses at least 40 metric tons of freshwater a day and 45 metric tons of fuel a day.

One of the ship’s water maker

The last tour destination was the moon pool. I could see water sloshing around in the moon pool. It was pretty cool. Unfortunately, no styrofoam cups were shrunk in this tour. I wished it did though.

In this post, I am being absolutely lazy to explain every technical term I have written, however, I have added the links to these terms! I am starting my night shift as I am writing this – so, I am half snoozing already! Hasta la vista readers.