I have not had the chance to write much about what I do aboard the JR as part of the scientific team. Part of being involved in science is to also share the knowledge or rather to spark interest in science from various groups of students ranging from middle to high schoolers up to college students. Since I have been on the zombie midnight to midday shift, I have been involved in several U.S. East Coast schools and just today, we broadcasted live to a school in New Jersey. Our education officer, Juliet, in charge of all U.S. broadcasts goes around with her iPad live with a school across the pond. With the iPad, she gives a virtual tour of the JR and the scientists aboard give an explanation to the routine we have been doing and a Q & A sessions with the kids. 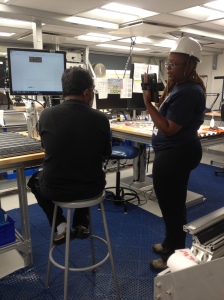 Juliet having a colleague , Nath to explain to the kids what he does

It was pretty interesting to virtually explain and show how work is performed on the ship.

Broadcasting live with Jesus during a core description

Basically, each scientist would explain their duties during their shift and the tools that are needed to perform the research. My basic tools pretty much include a hand lens, a bottle of 10% HCl, and a pencil. The rest are done by my eyes – observation based descriptions is what I do in a nutshell.

Another colleague, Sloss who is in charge of all our core summaries

And with every scientist, there is always someone behind the computers inputting information into the database for use to write our reports. Sloss, our only native English speaker is basically pushed to the limit to proofread everything we write!

I think there will be broadcasts every night this week from the U.S. east coast. A couple of weeks ago, there was a broadcast to a school in Washington D.C. It will be interesting and fun to explain to the kids how I handle seasickness out here for the first time before acquiring my sealegs; or maybe even after acquiring my sealegs.